The Wealth-X World Ultra Wealth Report 2021 provides an in-depth analysis of the ultra-high net worth (UHNW) population — a group of individuals with $30m+ net worth. As experts in the affluent market, Relevance stays at the forefront of wealth data to gain further insight into these UHNWIs; working to understand where they live, their age, where they studied, their industry, roles, hobbies, the people and brands who influence them, media and events attended, the content they consume, their personality traits, buying mindset and purchase influences, and online habits. Below, discover our top ten takeaways from the latest Wealth-X report.

What we learnt from the 2021 ultra-wealth report 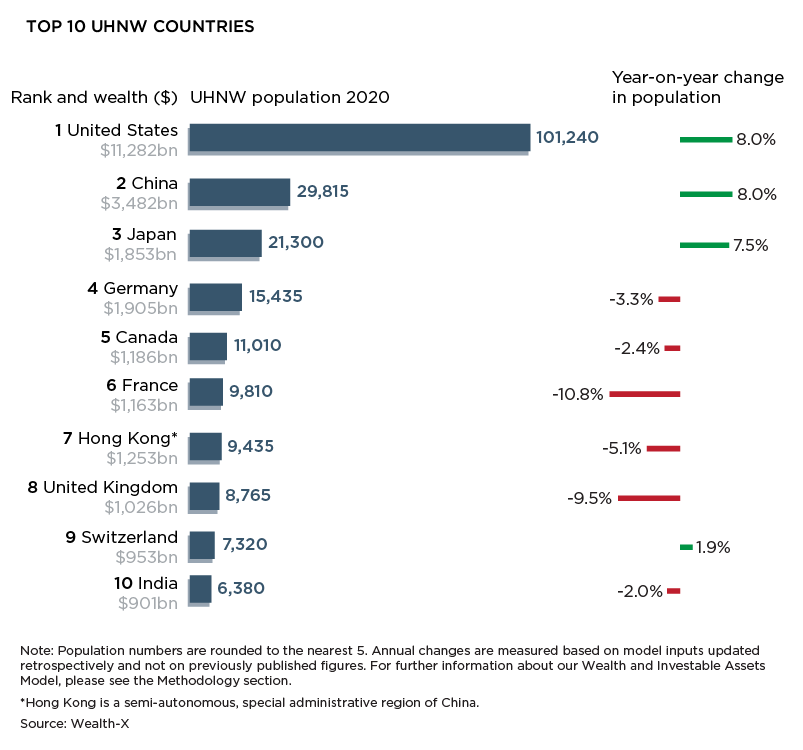 These 10 countries are home to three-quarters of the global UHNW population. Despite sharply contrasting performances across the leading wealth markets in 2020, this top 10 ranking remains the same as the previous year.

For the second year in a row, the regions which performed the best were North America and Asia, both recording solid growth of their UHNW populations and collective net worth. The other five regions all saw declines. While ultra-wealth in Africa didn’t fall by much, the Pacific, Europe and the Middle East all registered noticeable drops that largely wiped out the previous year’s gains. Latin America and the Caribbean performed worst of all the regions, with the UHNW population and collective net worth there falling by almost a quarter.

This difference in performance was due to differing public health, economic disruption, policy intervention, asset values and vaccine progress around the world.

This is due to changes in the global economic landscape, including the substantial rise of enterprise opportunities in emerging markets and technological advances, that have enabled new wealth to be created relatively quickly.

At the same time, those whose wealth is purely inherited now account for just 7% of UHNW individuals – a small decline from 2016 levels.

However, it is worth noting that women still make up just 10% of the UHNW population. While the proportion of high-wealth women has risen over the last decade, thanks to shifting cultural attitudes, a larger proportion of female entrepreneurs, and wealth transfers between generations, the UHNW community is still heavily dominated by males.

Since wealth generally takes decades to create or be passed to the next generation, equalisation between the genders of UHNWIs is likely to take a very long time, however gradual change will continue to slowly and steadily make an impact.

For more insights into UHNWIs, contact the specialists at Relevance today.