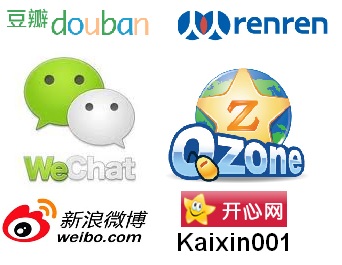 It is vital to understand the dynamics of the exploding social media space in China if your company plans to engage Chinese consumers.

According to McKinsey’s survey*, Chinese social media sites are already nearly as important as web portals, such as Sohu (the largest Chinese portal), Sina, NetEase and Yahoo.

Not only having the world’s largest Internet user base of 513 million people, China also creates the world’s most active environment for social media. 300 million Chinese internet users spend more than 40 percent of their online time engaging with social media. In addition, social media has greater influence on purchasing decisions of consumers in China than in other countries. Chinese consumers are more willing to buy a product if it was endorsed on a social media site and the recommendations by their friends may facilitate an actual purchase.

However, Chinese internet users have no access to “Facebook” and “Twitter”. Instead, they rely heavily on local social media sites. Here are the networking sites to focus on:

In addition, it seems that social media optimisation (SMO) will lead to greater success in search engine optimisation (SEO) in China. SMO focuses more on user experience, the quality of the content and the authority of the author. Internet users are invited to communicate and respond to these interactions. In a word, SMO can generate traffic from both direct social site referrals and from search engines, which can improve SEO performance.