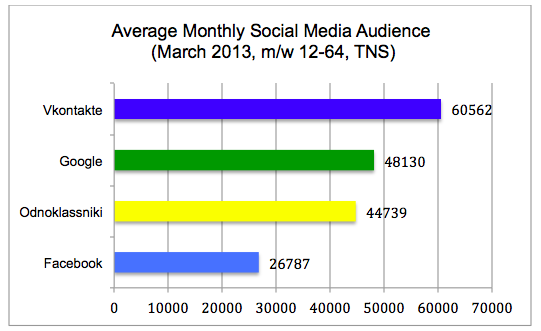 The general picture of monthly social media usage in Russia can be seen in the following graphic:

As you can see, Twitter doesn’t even make the top 4, whilst the global king of social media, Facebook, is beaten by Vkontakte and Odnoklassniki. When you take into consideration the fact that the figure for Google incorporates Google, G+ and YouTube that also becomes a lot less impressive.

The activity of Russians on social media is very different to the rest of the world. Well-known sites such as Facebook, Twitter and G+ don’t have the same level of power in Russia compared to the Russian social networks Vkontakte and Odnoklassniki.

When you look at the total number of social media users in Russia the Figures come out even more in favour of the Russian sites.

To optimise an SEM campaign in Russia it is clear that companies need to look past Facebook and Twitter, which have low uptakes of new Russian users, and place most of their focus on the Russian networks.

So which of the two Russian networks is the most important? Obviously in terms of users then Vkontakte is out in front, however it still may be more beneficial to prioritise Odnoklassniki depending on your company’s target audience. Vkontakte attracts mostly young people under the age of 25 and is slowly growing in the “25+” segment with a large percentage of female users. Odnoklassniki tends to attract a slightly older audience in the “35 to 45+” range and 55% of its users are men. Vkontakte wins when it comes to business possibilities as it is an independent platform and is already used by well-known brands. Odnoklassniki on the other hand is a part of the Russian Mail.ru service and it was mainly created for personal connections.

Even though the Russian social networks cover most of the social media market in Russia, Facebook and Twitter still shouldn’t be ignored. They tend to attract younger well-educated people who speak foreign languages, have international connections and are active and interested in business. Twitter in Russia is comparatively small, but the people that do tend to use it are Russian celebrities, politicians and journalists, people who have a significant influence over others. The most famous Russian Tweeter is the ex-president, Dmitri Medvedev. You should also not to forget about G+. Even though it’s small in Russia it attracts young and active people, who often are looking for business connections and who work in marketing and PR including journalists and bloggers. Moreover, Google+ plays a large role in the SERP ranking of a company site.

Undertaking an SEM campaign in Russia can seem quite complex as the usual social media powerhouses are not as strong and there are other leading players. The main point to remember is that it’s important to understand your target market and goals in order to channel most of your efforts through the right platform. In truth however none of the social networks should be completely ignored as they all play a role in the wider social media space.