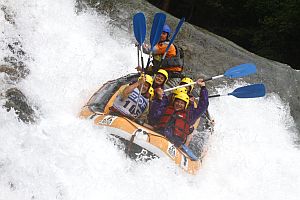 Relevance Web Marketing: Better on Computers than in the Water?

In the summer time, the French Alps come alive with sporting activities from climbing and mountain-biking to white-water rafting. The Serre Chevalier ‘Office du Tourisme’ organises a variety of events to promote the region including the ‘Fest’eaux vives’. The annual white-water festival hosts a variety of competitive classes and demonstrations over 2 days, incorporating a competition for local businesses in the Serre Chevalier Valley.

Keen to participate in the event, Relevance Web Marketing put together a team consisting of 3 employees along with some ‘brave’ local clients. However, with a collective experience of less than 10 ‘white-water’ hours and 2 members never having set foot in a raft, it was with some trepidation that we headed to Chantemerle to compete.

The weather leading up to the June 18th competition had been extremely wet, with heavy rain both overnight and on the morning of the event. Even without the rain, June normally offers big flows so we knew the pace of the river that day would be fast. The course was to cover a stretch of the Durance starting at Chantemerle and finishing at Briancon over 8km of level 4 rapids. (1 being the lowest and 5 the highest). 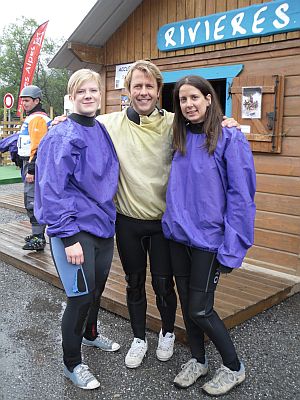 Our guide explained that on some rivers it would be quite safe to fall in the water, however on this particular stretch of the Durance, he wanted to ensure as far as possible that everyone stayed in the raft. Encouraging words before our impending depart! After taking some time to go through some basic rafting drills on the bank, our team missed their designated slot, prompting the commentator to comment “Maybe Relevance Web Marketing are better on computers than they are in the water”. We certainly had some work to do!

Following a rather premature countdown, with only 1 member of the team actually in the raft as the starter gave the signal, we were underway. The speed and power of the water certainly came as a shock, although our guide assured as that this was merely the ‘warm-up’ section.  Other hazards included the many overhanging branches, demonstrating the need for the safety helmets we had been given.

We successfully navigated 2 sections of rapids before approaching a series of warning signs. Whatever was coming up was looking pretty serious!  Our guide seemed relaxed, informing us that all we had to navigate was a ‘weir’ or drop of about 10 or 12 feet.  On his command, we had to adopt a safety position sitting down in the raft and holding our paddles upright. Our descent down the fall was captured on camera; most of us open-mouthed as we dropped.  A ‘tidal wave’ of water was there to greet us at the bottom but we somehow emerged unscathed.

The route continued on to Briancon through varying degrees of rapids. Despite, getting stuck on the rocks twice and almost losing Polly Wakefield over the side, we navigated successfully to finish a creditable 22nd out of 35 rafts.  This was only 3 minutes behind the winners, an encouraging result given our hold-up at the start and our inexperience.

At the prize-giving, the event commentator expressed that, due to the participation of a ‘British’ team, they could call the event authentically European.  Overall, Thomas Randall summed up the mood of the day saying that he felt “extremely wet but extremely happy”.