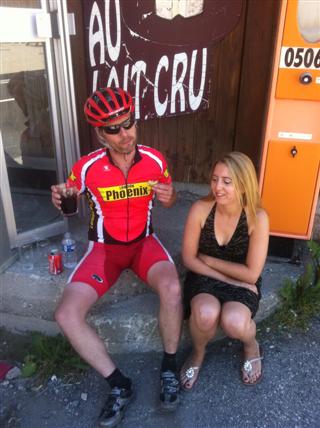 Last weekend saw the Marmotte coming past the Relevance Web Marketing office, with one of our guys racing and completing this enduring race in just over 10 hours. La Marmotte is a 174km cycling race that climbs 5000m over three mountain passes or cols – Col de Galibier, Col de Croix de Fer, and the Col de Telegraphe then finishes up Alps D’Huez. The race climbs many of the ascents of the French Alps that the Tour de France has made famous. The Tour de France is coming to Briancon, home of the Relevance Web Marketing French Alps office, Wednesday and Thursday next week. Matthew Johnston one of the Relevance Web Marketing online marketing consultants took part in the Marmotte cycle race with brother Peter Johnston; the duo claimed gold and silver medals on times. The race is done in a day, and many consider it one of the most gruelling cycle tests on the curcuit with a final ascent of Alpes D’Huez ‘s 22 twisty corners for the finale (scene of Lance Armstrong’s triumphant ascent in 2005, where he asserted his dominance of the sport of cycling and his rivals.) Relevance Web Marketing sponsored the brothers with a bike car, a place to stay, and some good meals, not to mention the party in Briancon afterwards. Relevance Web Marketing would like to congratulate the brothers on probably one of the most heroic acts we have ever been part of. See you next year!