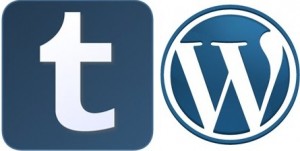 Introducing Tumblr – The Alternative to WordPress?

No business should be a stranger to blogging, and a site that most businesses in the past have turned to for all their blogging needs has been WordPress.com.

WordPress.com has been in operation for the last eight years. It is the product of the adapted WordPress.org which requires users to have a hosting account, database, FTP and other various acronyms. WordPress.com was built on a much simpler network that provides the blogging experience to a much larger audience. However recently a new microblogging platform has appeared on the scene that seems intent in becoming a major competitor in the blogging arena.

Established 4 years ago Tumblr allows users to share text, photos, quotes, links, music and videos to the Tumblr community. All aspects of the platform can be customised to suit the user’s tastes and desires. The average Tumblr user creates around 14 blogs a month, and reblogs approximately 3. Around half of these tend to be photos with the rest split amongst text, links, quotes, music and video.

In January, Tumblr had more than 7 million individual blogs, however in the last few months this number has risen to a staggering 20 million. This week Tumblr overtook WordPress.com in the number of blogs that it had on its site by approximately 85,000 pushing Tumblr to the top as the new microblogging leader.

It is obvious from these numbers that a great deal of people have been signing up to Tumblr recently including top companies in entertainment, news and fashion. They are enjoying the different features available to them in as apposed to the standard WordPress format.

Top brands such as the National Football League, CNN and TED who have previously used WordPress.com are turning their attention to Tumblr and its more up-to-date mediums. Focus has increasingly been drawn to the fact that Tumblr is perceived to have a greater social media presence with Tumblr  blogs having been described as a cross between a standard blog and social media site, such as Facebook.

With the internet growing ever more socially consious there is little surprise in the industry regarding Tumblr’s sudden surge in popularity, the question is what will WordPress come up with next in order to claw back lost ground?